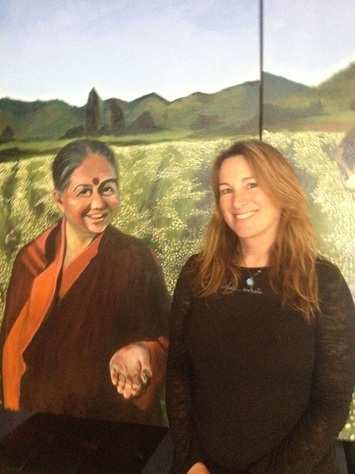 Currently I live in Petaluma, California.
My childhood was spent on the Southern Penninsula in the San Francisco Bay Area in Woodside,
near La Honda. It was there I developed a love for redwood trees, horses, wolves and all the rest of nature.

​My artwork is an attempt to understand, enjoy and heal my world.
In 1989 I graduated from Southern Oregon University in Ashland, Oregon
with a Bachelor of Science in Fine and Performing Arts, fine art painting.
I chose art and dance in college because they are sane ways to exist in the world.

In the 1990s I joined up with activists trying to protect the last 3% of
California's ancient Redwood Trees, which is now protected Headwaters Forest.
In 2004 I discovered the topic of human rights as a result of the
US-backed Haitian coup of the elected government of Jean Betrand Aristide and began
to learn about the people and politics involved in human rights abuses; victims, perpetrators,
heroes and enablers. Cutting edge human rights activists and lawyers became my heroes
because their work is to undo damage, to right wrongs. I have painted a few.
I have edited a couple videos for use by human rights activists.
In 2007 I traveled with torture survivors from El Salvador to help document their journey
​to protest the School of the Americas torture-teaching programs at Fort Benning, Georgia.
I learned more about very unpleasant aspects of power. I began to see patterns.

​
.
Art video
Created for a College of Marin filmmaking course, re: saving Headwaters Forest in the 90s.
(Sorry about the really, really bad resolution.  I think this was shot on a Hi-8 camera.
The subtitle type, etc resolution is horrendous.  I found this project on a zip drive- that's how old it is!)