Oil and collage on canvas
4' x 7'
Within the collage is related newspaper articles, information about endangered
species that may die out, various quotes, and a reference to the Rights of Nature. 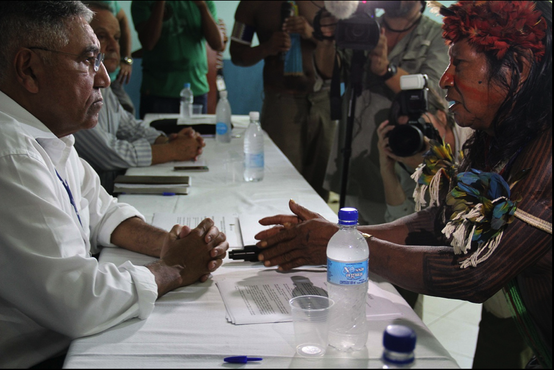 Tuesday July 10, 2012
Photo stream by International Rivers: About seventy Xikrin Kayapo leaders affected by the Belo Monte Dam and the dam building consortium Norte Energia met with Norte Energia in Altamira, Brazil.
"In August 2011, the federal prosecutor’s office in Belém filed another suit against the construction of Belo Monte – on the remarkable grounds that it would violate not only the rights of the indigenous peoples, but also those of nature. This is the first time in Brazilian legal history that an argument based on the rights of nature had been made. Such rights were first established in Ecuador’s new constitution in 2008.
“Humanity is moving toward recognizing nature as a legal entity,” argues prosecutor Felício Pontes, “clean air is no longer considered res nullius. It is becoming res omnium.” Yet there can be no doubt that the Brazilian courts will rule in favor of the powerful, just as the environmental agency Ibama has to yield to the president’s directives."
-Belo Monte and the Destruction of the Commons, by Gerhard Dilger
Powered by